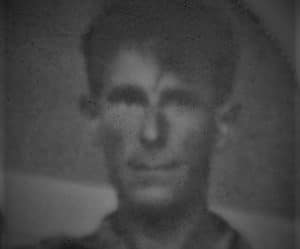 Philias Guimond built his own wooden boat for fishing lobster.

Back in those days, there was no electricity in Escuminac. Philias engineered and built many of his own tools and equipment such as a band saw that ran off a
6-cylinder Chevy engine.

All shaping was done by axe, draw knife, and hand plane while holes were bored by brace and bit with steel augers. He softened the ribs in a wood fired steam box.

For a few years, he built boats each summer in a field behind the homestead. In the early 1950’s he built a boat shed. The harbor situated across the road was soon filled with 38’ boats.

Most were driven by a 6-cylinder Chevy engine.

Escuminac and neighboring villages were deeply saddened when the lives of 35 brave salmon fishermen were lost at sea.

The “Escuminac Disaster” occurred due to the extra tropical remnants of an atlantic hurricane, and remains the worst fishing-related disasters in the history of Atlantic Canada.

Building Boats at a Young Age

At only 13 years old, Philias Jr. (Phil) began building boats with his father. 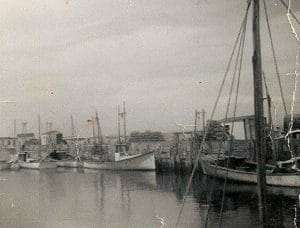 To help support the household with 5 younger siblings, Phil fished in the summer and built boats in the winter. 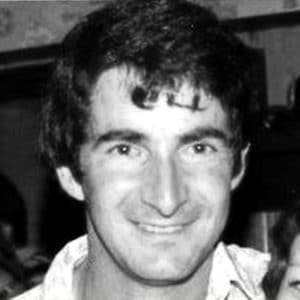 At 20, Phil took over the boat building business.

Phil now had his own licenses to fish lobster, salmon, and ground fish. He built boats in the evenings, on storm days, and throughout the winter.

Over the next two decades he developed the traditional hull design into what became the “Miramichi” hull known for its flared bow.

In the winter of 71’/72’ Phil built himself one of the largest fishing in the fleet measuring 45’. Uncommon to the area at this time, the V bottom named Miramichi Pride was powered by twin 454 Chevy gas engines. She was the fastest around and hard to catch!

Miramichi Pride was the first wooden boat in Atlantic Canada to have a flared-out bow stem. At the drop of a hat, it caught the eye of many and became a Guimond trademark. 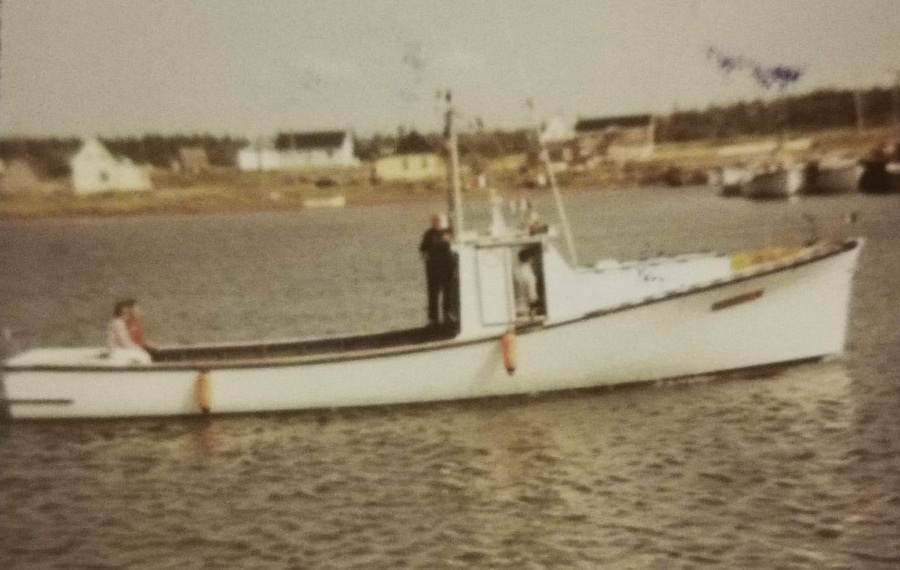 In the spring of 72’, Charlie Deagle and Stevie Gallant of Miminegash, Prince Edward Island each gave a $300 deposit to have a boat built with the carved-out “Crooked Bow”. They both took delivery in the spring of 1973.

To Fish or Build

Canadian law forced Phil, the fisherman and entrepreneur, to decide whether to fish or own a business, but he could not do both.

It was hard to let go, but his decision was soon made clear.

Not only did he decide on building boats, but he took it to the next level and launched the production of the Miramichi 40 fiberglass hull in 1981.

Also learning a new trade in the fiberglass, were the loyal employees and friends Ade Martin, Tim Durelle, Greg Durelle, and Ted Manuel.

The 40’ hull seemed too big for many local fishermen. The Miramichi 38 hull mold was designed with a sleek entry and with more flare. She only had a 12’ beam tapering to a 9’ transom, but her sharp turning and shallow draft made it great for fishing the shoals. They sold like hotcakes! 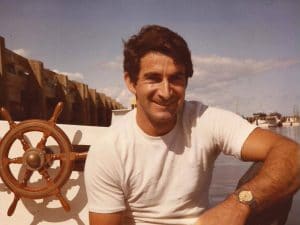 Fishermen from New Brunswick’s North Shore wanted smaller boats with outboard power. The Miramichi 24 was formed then later increased in length and freeboard to become the Miramichi 25. 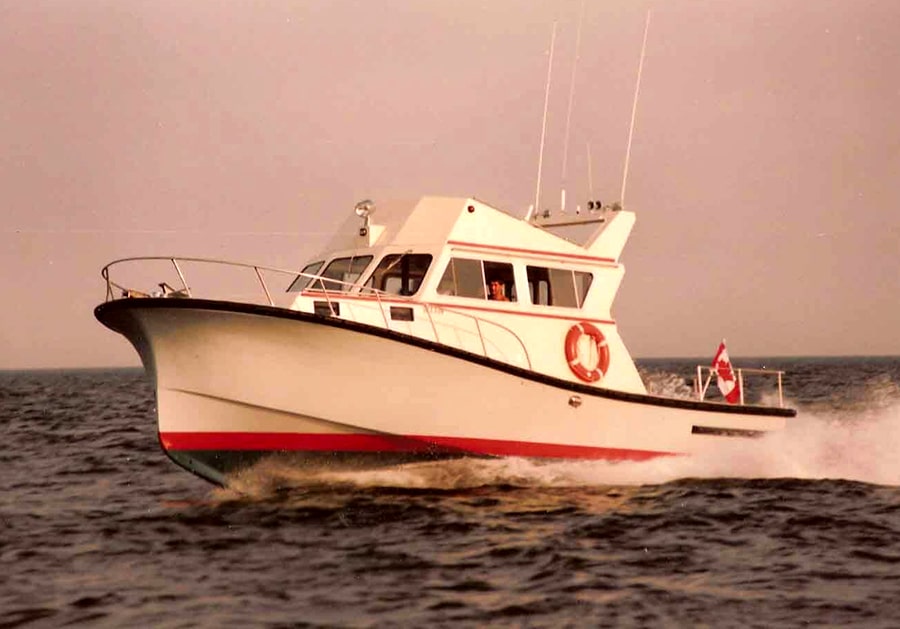 It was available in both a lobster style and as a pleasure cruiser. 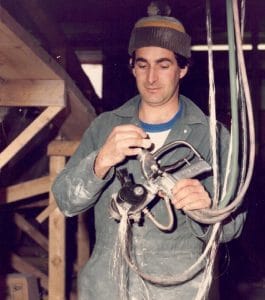 Miramichi 43 – The Next Evolution 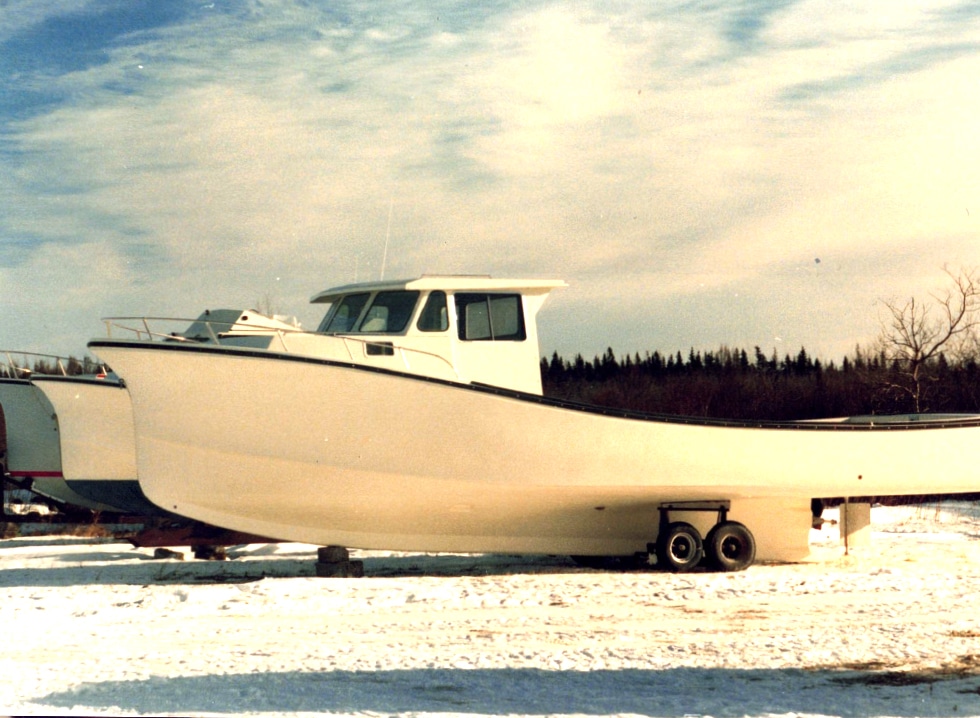 This one had the built-in spray rails, coupled with a molded rooftop and fiberglass spoiler.

The first was demoed in Miminegash Harbour and seven orders were placed that day, all taking delivery the following year. The new look had paved the way into the 90’s.

The 300th Fiberglass Boat Was Built 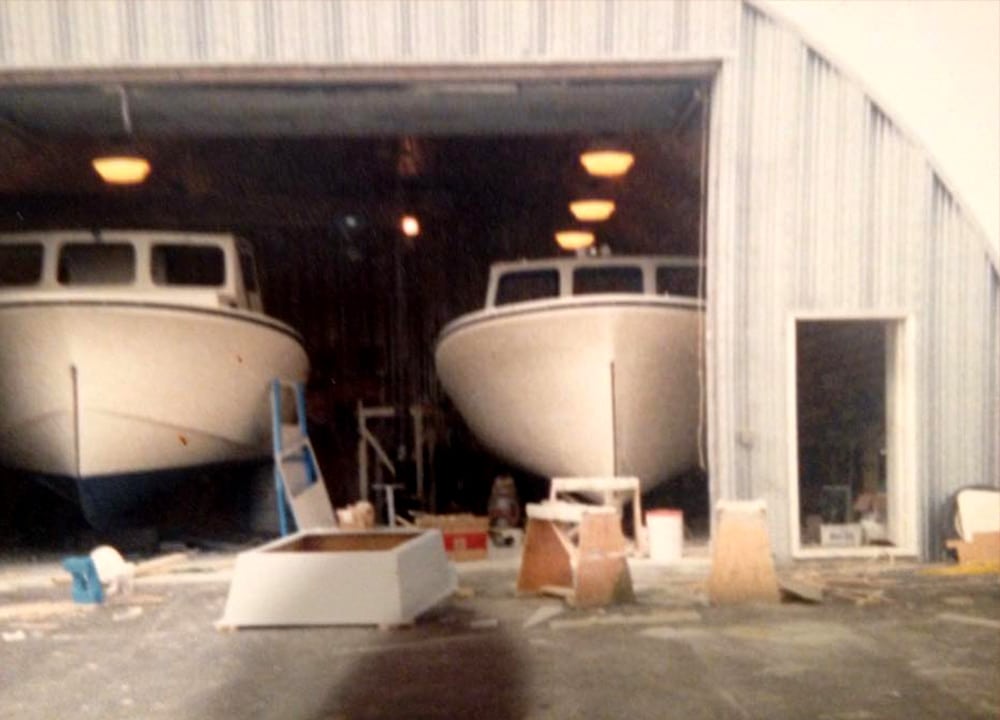 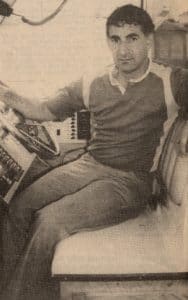 After a few years fighting a chemical sensitivity illness, Phil decided to sell the boat business, and began building modular homes. Where he would be less exposed to fumes and odors.

He finished his last fiberglass boat to run charters on the Miramichi river. This modified Miramichi 31 measured 39’ and would bear the name “Miss Miramichi”. 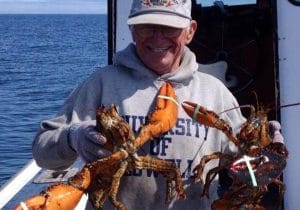 Those were the words Phil would often use when telling his story about building wooden boats, to then fiberglass boats, to homes, and back to wooden boats.

Phil finally agreed and decided to go back to what he knew best…. Build boats!

This is when the third generation took flight. Phil’s youngest son Cory at 19, fresh out of electrical college was eager to forget his new trade and to walk in his father’s boat building footsteps.

Working 80+ hours per week was a start in the right direction!

Cory continued to remain focused on building hulls, their structure, and cabins. Together, the duo finished two boats and had a start on two others.

Eldest son, Randy joined the team later that year. At 25 years old, he had previously worked in the fiberglass boat business and was knowledgeable with the installation of engines, hydraulics, electrical and other mechanics. 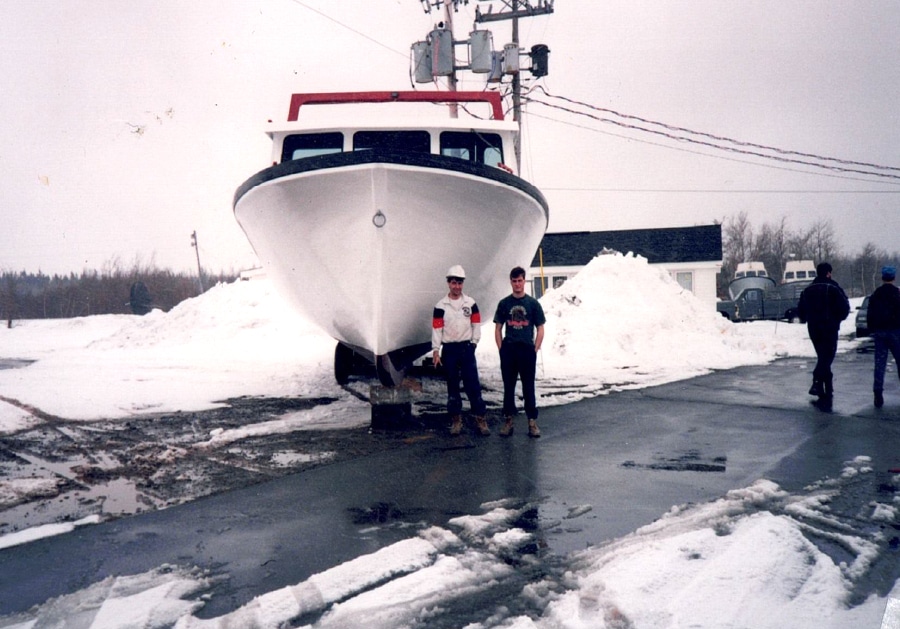 On January 21st 1995, at 46, Phil died suddenly when struct by a dump trailer at the workplace.

The loss of one of the finest and well-respected builders and fishermen in the industry was felt throughout.

His legacy will never be forgotten. Sons Cory and Randy finished the boats they had started, and began taking new orders.

After 18 months of building wooden boats, the brothers agreed that if they were going to be successful, they had to get back into the fiberglass boat business.

Within 8 months the wooden plug was finished, the mold was cast, and the first hull was built. 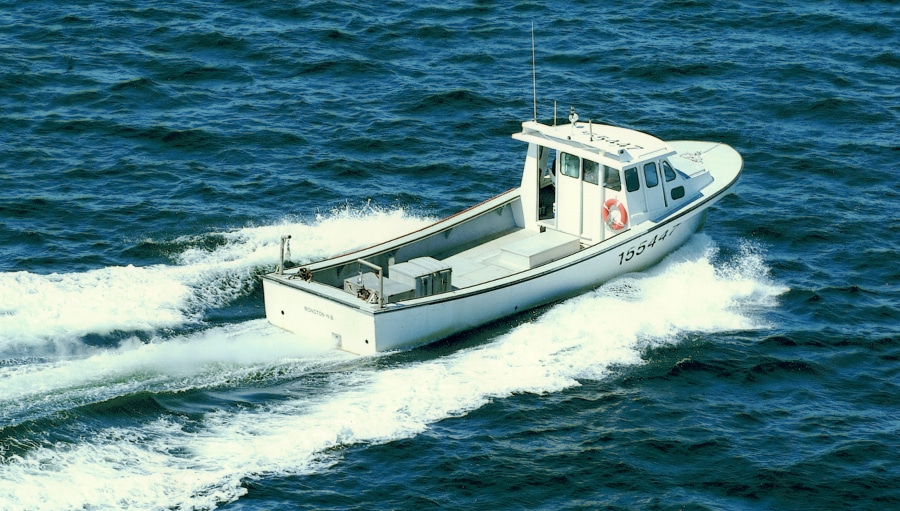 Roland Thibodeau was the first to take delivery of the new Guimond 45 built in “speed rails” and the two front windshields. Ken Doucet took the second later that year. Changes and improvements were still ongoing!

The first Guimond 45 sold south of the border was to Paul Herrick, who fished for conch, blue crab, and croaker out of Virginia Beach, VA.

On route, the vessel “Sunrise”  stopped in Boston to display at the Boston Atlantic Fish Expo.

Since 1997, business had grown tenfold. Sales were made up of 75% exports, and boats were being shipped all over the USA, even as far as Alaska and Hawaii.

Other boats were sold to Puerto Rico, Tobago, and Portugal.

When not building boats, Cory would be attending trade shows and growing markets. Already, 80 Guimond 45s had been finished in-house and sold.

There was a growing demand for larger boats. Widening, raising, and stretching the Guimond 45 was often required. When it came to build new molds and buy new facilities, the brothers didn’t see things alike, and decided to part ways.

Cory became 100% owner of the boat building operation, from this point on, known as Millennium Marine.

Randy continued to be a valuable employee into 2006.

Randy later moved on to be a successful Production Manager at a large milk and dairy plant before moving on to an even higher position in the peat business.

During this era, Millennium Marine became one of the largest exporters of fishing boats in Atlantic Canada.

Boats were now sold into the North Atlantic (Greenland and Faroe Islands), the UK,  and Bermuda.

Boats have also been sold for governmental use in several US states.

For many boat builders, sales came to a grinding halt, followed by two years of economic recession.

By 2010 most boat yards had closed, but Guimond continued to profit and grow his business and product line. 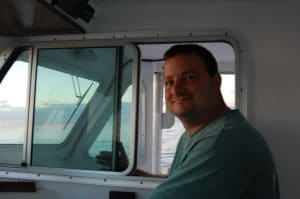 Definitely our most watched video, Keeper was built as a patrol boat for the state of Rhode Island.

In this photo, Cory is sailing Keeper from Escuminac, NB to her home  port in Warwick, RI.

Cory – “She held a true 20 knots from Clarks Harbour, NS to Cape Cod, sailing through rough seas stirred up by Hurricane Igor”.

Facing harder and harder times finding workers in Canada,  and with a vision to grow a charter boat market that requires a US built hull, Cory ceased operations in Canada and incorporated Millennium Marine USA.

Despite delays, and numerous unforeseen setbacks, MMUSA has later grown to 30 employees, and produced 50 hulls in less than two years. 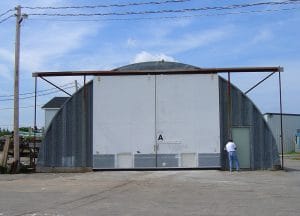 A growing Canadian market led to the re-opening of Guimond’s Canadian facilities, where kit boats sold from the US company would be outfitted. 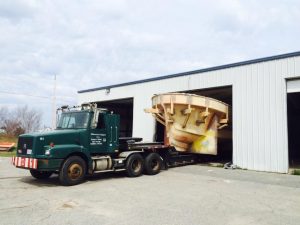 Disagreement with a new city manager and council, resulted in Guimond packing up and moving all operations back to Canada. 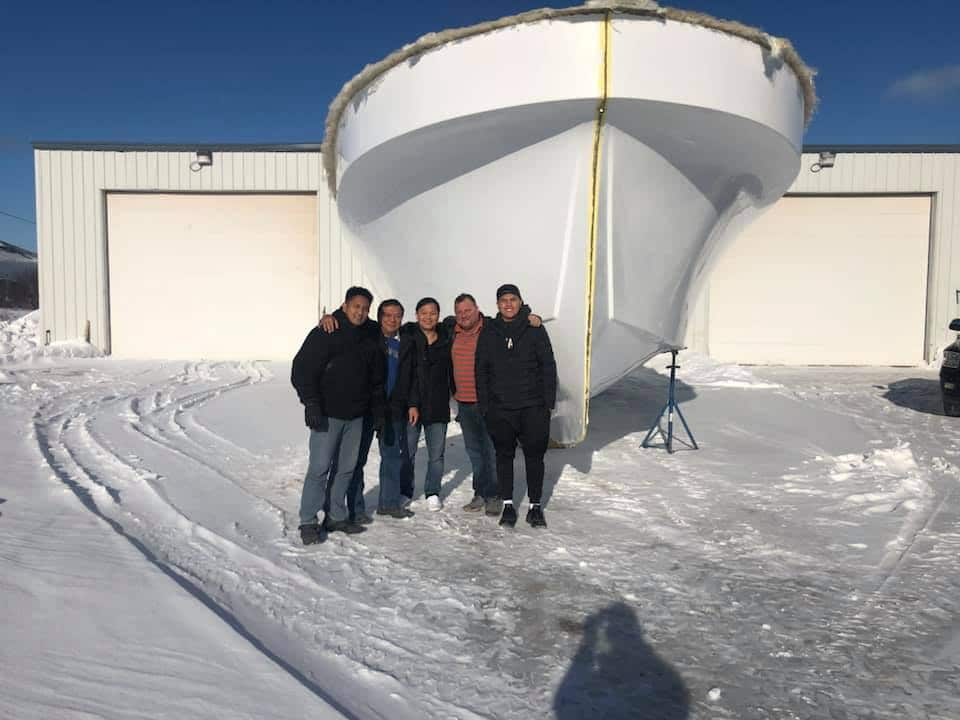 To fill a needed workforce, Guimond traveled to the Philippines and recruited the company’s first 10 foreign workers. 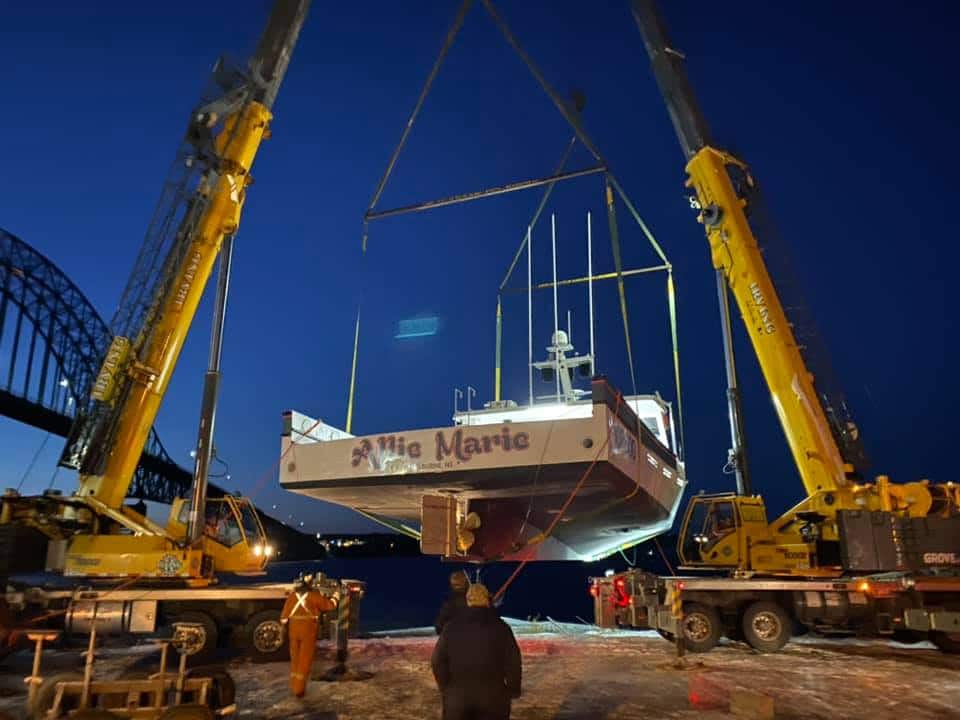 Sales reached an all time high.

We launched our first MEGA 50 and put all our Donelle models back into full production. 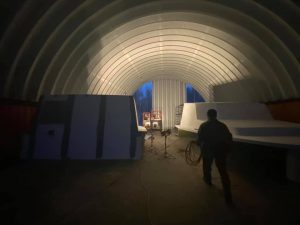